Teaching myself the basics one recipe at a time

I was excited and fearful all at once. It was time to get this project started and produce some lean bread, the first recipe in the textbook herein called The Book. Lean bread is basically crusty French bread. It contains only four ingredients – flour, water, yeast, and salt.

The Book lists large batch recipes. This one called for five pounds of flour. My mixer could never handle that. Plus, do I really need eight loaves of bread? The entire book is this way so I have an added challenge of having to shrink down all of the recipes. I decided to make two loaves. I must have spent an hour on my calculations. I had to look up conversions – pounds to ounces (1 lb equals 16 Oz), ounces to grams (1 ounce to 28.35 grams), etc. Sadly, I did not calculate correctly. The first batch did not rise and the finished product was a mess, undone and entirely too salty. Oops. The bread was under dome and just plain awful. Second batch was worse because I was trying to hurry it along but no rise and too salty. That figures because I didn’t adjust or taste the dough. Lesson learned. I was hoping I would have wonderful, fresh out of the oven bread to bring to the neighbor’s dinner party but alas, no. I was brave and let everyone try it. Hey, it’s ok. I expected failure because I’ve never made bread before, but it still stung.

I regret not taking a photo of the inside, but here are some from those batches. 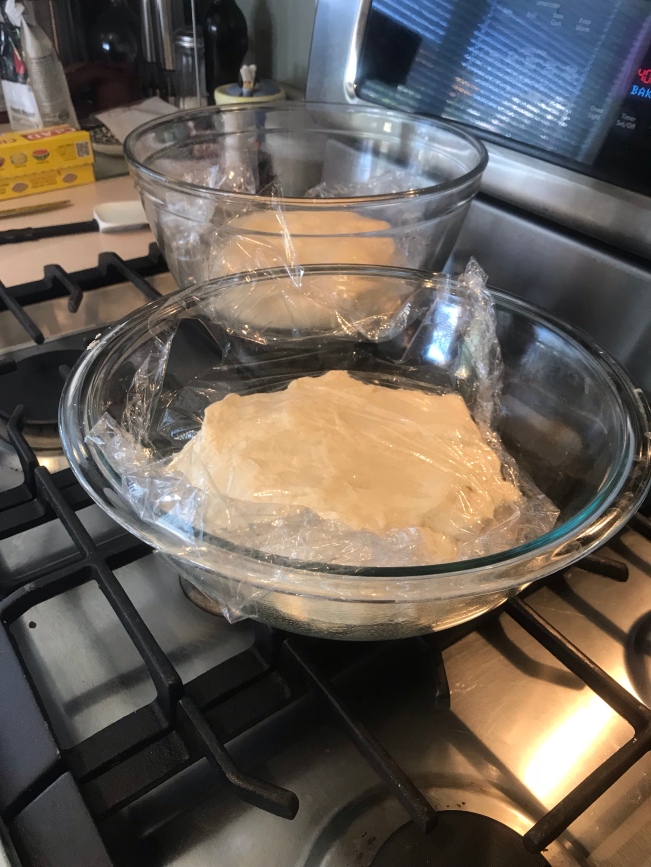 On Sunday, I tried again. I admit I was starting to doubt my abilities after that second batch failed. I told my husband and he encouraged me not to give up and look at different recipes like I was thinking to do. But, my husband reminded me that I could do this and he sat with me and helped me recalculate the measurements. He also brought out a scale he had that performed exactly as I needed – .1875 ounces, really? I am so appreciative of the support because this is a big project and undertaking and I need a cheerleader. I decided then and there I would make it as many times as it took to produce something edible. And guess what? Third time’s a charm. Yay me!

Was it perfect? No it wasn’t perfect – I had trouble with the preshaping and final shaping of the loaves. I opted to freestyle and thankfully it worked. I got the rise I was expecting and it was just… fun. I was so proud. Giddy. I felt like I just climbed a mountain. Well I imagine that’s how I would feel if I ever climbed a mountain which I have not but hey, I did it. Here are some pics from my third attempt.

I’m ready to make bagels on Friday. I ordered the ingredients on Amazon and got them on the weekend. I will spend that day making the dough and watching Cable Girls on Netflix, my new favorite binge. Hopefully we will have yummy delicious bagel treats on Saturday morning. It’s also possible that I’ll have another fail or three and have to redo it but this time I’m ready. This is an adventure after all and I need to enjoy the journey.

“Let there be work, bread, water, and salt for all.” Nelson Mandela