I was worried about this recipe for several reasons. I don’t know if it was the French name (it’s white sandwich bread essentially) or the fact that I had to use a Pullman pan – which up until this recipe I had never heard of – but worried I was. Oh yeah. And the maths. There was lots of maths. (I know math doesn’t need an “s” at the end but it’s how I’m saying it. It’s more fun.) So as I’ve had to do with all of these recipes, I’ve needed to size the servings down. This one was the biggest conversion yet. The recipe as written in The Book yields 37 plus pounds of dough which is supposed to make 15 three-pound loaves of bread. Fifteen!! Up until this point, I’d been dividing my recipes by 4 and just seeing what happened. I certainly didn’t need to make that many loaves plus my stand mixer could never hold 20 pounds of flour! I realized I needed to think about this another way and started looking online. I did additional calculations by dividing by eight but then I wasn’t sure I wanted to deal with two loaves as I only have one pan. Decisions. I started reading about baker’s percentages and then finally clued in on how to use that information in The Book. It was right there all along.

A baker’s percentage is a way to calculate ingredient percentages based off total flour quantity. The flour is considered 100% and then everything else is a percentage. For example, my recipe called for 20 pounds 15 ounces (335 ounces) of flour. The amount of water required was 64.9% (13 pounds 10 ounces or 218 ounces). I converted the pounds to ounces so I could do the calculations more easily. So if the yield is 15 loaves but I only wanted one loaf, I decided to divide flour by 15 – so 335 ounces divided by 15 equals 22.33 ounces of flour. So 22.33 equals 100%. To calculate water percentage, I would take total flour ounces 22.33 and multiply by 64.9% resulting in 14.49 ounces of water. The way I’d been doing it was just dividing it by a number (in prior recipes, I was dividing by 4) and guessing. So, to compare methods, 1/15th of 218 ounces equals 14.53 ounces of water and the baker’s percentage showed 14.49%. Pretty darn close!! I’ve probably lost everyone by now, but learning this method was a game changer. I feel confident I can start tweaking all kinds of recipes.

Now, back to the bread. It was awesome. Truly. Absolutely delicious bread which I used for days – sandwiches, cinnamon toast, grilled cheese, French toast… it was great. Even my kid liked it which is insane as she hates bread. (I don’t know how anyone could hate bread, especially someone I birthed, but there she is.) I need to make loaves in bulk and freeze them for later use.

And so now that this post is almost two weeks behind, I’m just going to show what I did and you can decide what you think. I did skip the ballet class taste testers because I ran out of time. They were disappointed. I sent the hubs a picture via text and he said they were jealous. After eating a warm slice with butter, they really were right to be sad. They missed out. 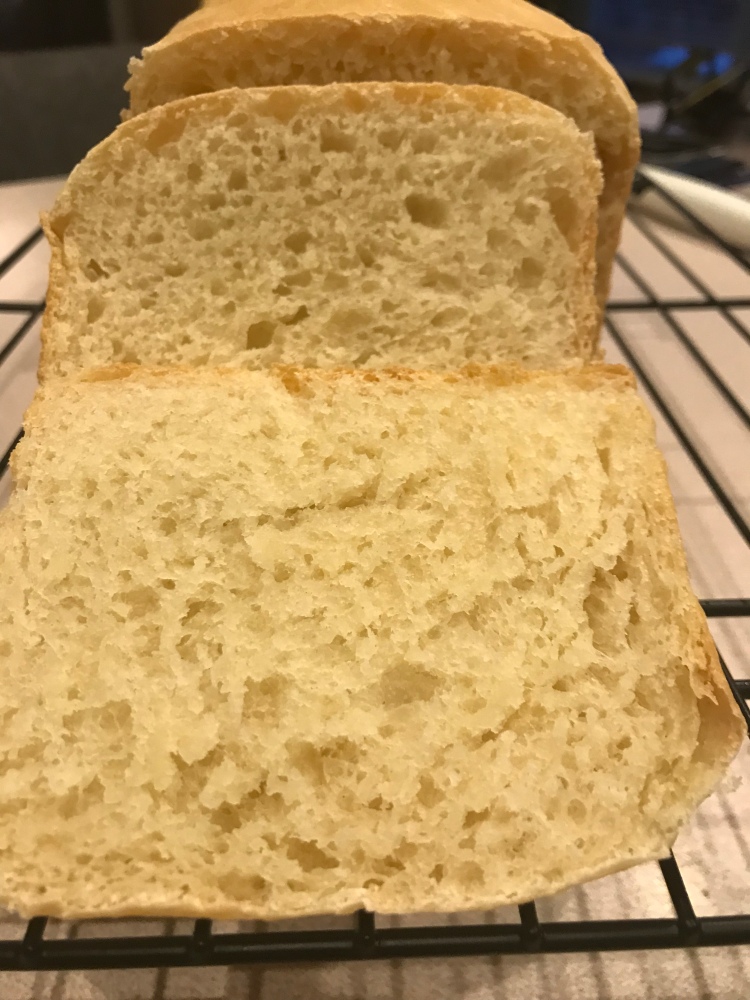 So there you have it – pretty great bread. Can’t wait to make it again.

Mom. Wife. Friend. Daughter. Sister. Music Lover. Learner - especially of all things baking and pastry. It's not failure, it's just an attempt to do better the next time. "Do or do not. There is no try. " - Yoda View more posts